OK, so Facebook bought Whatsapp for an incredible amount of money. Two reasons have been hypothesized as to the why of that deal: money or data.

Money? The figures do not add. With 450 billion of users paying 1 dollar per year, you're having a very long term goal or sky-high ambitions of increasing the user base.
Data? Sure there is a lot of data involved in Whatsapp. But, seriously, 35$ per user for additional data to use and sell to advertisers? That is a lot of money. Facebook already has a lot of data. They could better spend that money on an army of statisticians and save the other 18.9 billion for another deal.

So, what could be a reason? Usability or, in other words, the attractiveness of Facebook as a sub-internet. Due to its own succes, Facebook has become a massive network crowded with information. The expansion of the social medium called Facebook is gradually reaching a point where you can say that is has become an entire subsystem much like how http once was only a part of "the internet" (next to usenet, FTP, e-mail) but than gradually became a pars pro toto. This is all fine if you are looking at the business figures, but it has a serious drawback for the end user. The stream of information is now so immense that Facebook has to ration the timeline (well, they make money out of it as well, of course, with payed distribution of updates) and that many users finds themselves overwhelmed. This decreases the attractivity for users to spend time on Facebook and it partly explains the unfollowing of friends.

Whatsapp is a perfect solution for that. Integrating it in Facebook will install a sublayer that contains only proximal facebook friends. Indeed, your average contact list on Whatsapp will likely be much smaller than the number of Facebook Friends. It is your closer social inner circle.

Now, imagine a mobile Facebook app layout where Whatsapp is a card within the app. It will contain short status updates of your proximal inner circle. You'll be very interested in that part of the app and engaging a lot with it. Around that info will be your more distant Facebook circle, possibly with brand related posts and Facebook ads for monetization. And you can even imagine regular adds around that one as a third circle. Building the platform as such will ensure a continued interest in the use  of Facebook as a whole, due to the interest in proximal circle of contacts. There are two assumptions here. First, Facebook should try to be the best alternative for both the Whatsapp sub-app and for the overall network experience. Second, people should still be willing to buy smartphones the size of a 7" tablet because a card can only be fitted within an app on such a screen size or larger.
If the above is the way Facebook will integrate Whatsapp, than it is actually a very smart move by Facebook to build there own Google+ based on actual consumer uses. Google+ already has the functionality of different circles, it is closely linked with sharing of pictures and videos (cf. the recent Youtube integration) and it has its messaging/calling application with hangouts. The major drawback of Google+ is that Google built a very strong communication/social platform without consumer usage. I think, Facebook is moving to a very similar platform, but are buying the consumer usage and then make it a platform.
Posted by Unknown at 4:36 PM 3 comments:

A/B testing originated in advertising as a way to tell which of two types of communications (like two versions of an advertisement) where most effective in driving sales. Since the seminal book by Hopkins on "Scientific Advertising" (1923), the technique has been used in retail as well (e.g. in deciding on effective store design) and most recently in the design of websites. It is with regard to the latter that the term has rapidly gained even more attention and many (mostly) commercial websites now regularly do A/B testing to test certain design options (e.g. should one use the words "Buy Now" or "Order" for the check-out box). Some refer to such a website design test with "split test" because the test actually splits the visitors of the website in different groups, each seeing a different version of the website, and monitors key performance indicators such as check-outs, likes, or clicks. 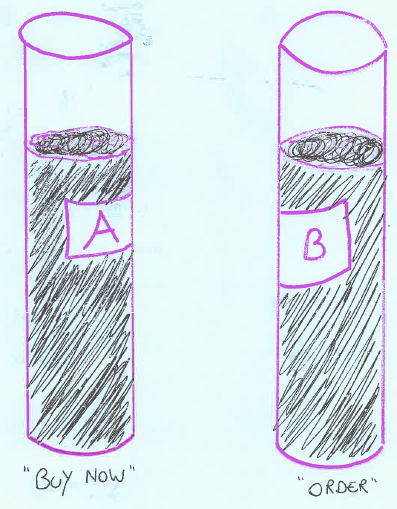 Why is this just the same as experimental research? The gist of A/B testing is that you manipulate at least one aspect (e.g., call-to-action, color, piece of text, positioning, ...) of your website. Experimental research would say that aspect is your independent variable. To do so, you have to design at least two versions of that website, each having a different value on the design variable you want to test (e.g., "buy now" vs "order" call-to-action). Each instance of the website could be called a condition. You then randomize the visitors to the website such that you can observe the visitors' behavior in each. This observation is what one would label the dependent measure as one thinks its value will at least partly depend on the value of the manipulated design variable. In sum, this is the description of the most basic experiment (and of the majority of A/B tests).

You see, the basics for the two are the same. They even share a bit of history. Though experimental research is older than A/B testing is, the first landmark publication is from the same era as Hopkins' book: Fisher's "The Arrangement of Field Experiments" dates back to 1926. Despite that similarity, I do believe that current A/B testing has not yet benefitted from the long tradition and theoretical advancements academics have made since then. Experimentation has been a core research method in agriculture, biomedicine, psychology, communication, etc. This resulted in crucial insights in the design, execution, measurement, and analysis of experiments. If these advances are being applied in A/B testing than they are surely not wildly shared.
(I will follow up on this post with one or more posts on specific experimentation insights that could be worthwhile from an A/B testing perspective)

Why does the above actually matter?
For students it implies that there might be a lot of transferable skills hiding in your courses. Try to understand experimental research, its subtleties, and the creativity involved with it. You might find it even more relevant after graduation when confronted with your own instance of A/B testing whatever content you will be producing professionally. For testers it implies that tests could benefit a lot from the extensive academic tradition of experimental research.